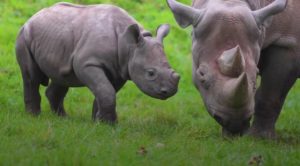 Ratnanagar, Chitwan: Two one-horned rhinos, which were swept away from the Chitwan National Park in a flooding four months ago, have been recovered from an Indian place. The rhinos were spotted in a place near a Balmiki Tiger Reserve around 25 kilometres from the Nepal-India border. Being informed of the recovery by the Tiger Reserve, a team from the CNP reached the site to take stock of the situation of the recovered rhinos.
“The spotted rhinos will be rescued within a few days,” said senior vet at the CNP Dr Kamal Gaire, adding that domesticated elephants have been sent to the rescue.
Eight rhinos swept away in the flooding have already been rescued from Indian territory. Two other rhinos were killed in the disaster.RSS