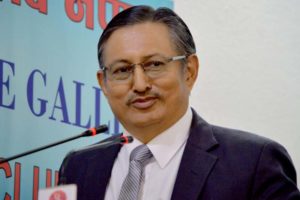 Kathmandu: Nepali Congress election publicity committee coordinator Bal Krishna Khand has said party rebel candidates will be punished as per the party statute.
Speaking at a face-to-face programme at the Reporters’ Club here Sunday, he warned the party rebel candidates either to withdraw candidacies or be ready to face action.
“The party does not need to take a further decision to punish the rebel candidates. As per the party statute, their general membership shall be automatically revoked,” he added.
He also warned that the party would turn tougher against those proposing and seconding the rebel candidates. To date, over 50 percent have of such have withdrawn their candidates.
He went on to say “Arrangements will be in place so that party top leaders can take part in mass meetings in all seven provinces to be held in view of the upcoming elections to the House of Representatives and State Assemblies scheduled for November 26 and December 7 while middle-range leaders shall be deputed to provinces and districts.”
As shared by leader Khand on the occasion, the mandatory participation of journalist in the publicity committee has been guaranteed for effective dissemination election-related news. “Victory of the democratic alliance is essential to unite all which is according to him is the need of the hour,” he asserted.Rss