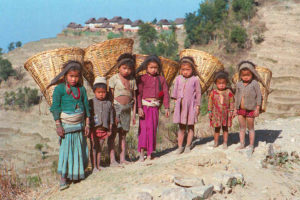 Nepal is a poor country with the majority of people still living below poverty line.  And in development, it has lagged behind most of the developing South Asian countries. Why is Nepal so poor and why a country with a great gift of nature, endowed with tens of thousands of resources, abundant hydro-potentials, and massive fertile agricultural lands and moreover with a country with innumerable attractions for tourists? The one and only reason is Nepal has no political stability though being a democratic republic Nepal could not have a strong government.
Nepal is not an overpopulated country like Bangladesh. The population size in consideration of the size of the country is not big. And being an agro-based country where the majority of populations live in villages and the majority has some land. Nepal could be really a rich country if Nepal has a modern farming system. Let us look at Israel, a country of the desert where farming seems not a possibility and today by introducing technology-based farming techniques Israel has revolutionized its farming mechanisms. The world is learning a lesson from Israel in farming. Nepal is sending many farmers to take training from Israel. Sana Kishan microfinance is sponsoring training programs to send many youths to learn farming at its own expenses. Nepal could do a great deal by learning lessons from a country like Israel, a war-torn country that got many times devastated by a series of wars, but still it is progressing economically. Though we have also gone through a series of the battle for ten years in Nepal about a decade ago but it is internal and now it is over and there is a kind of stability. Thus Nepal has every opportunity to develop itself economically.
In addition to great potentials for farming in Nepal we can be a country of tourism for Nepal is gifted with many natural beauties, the scale and size of mountain ranges, rivers and lakes tens of thousands of tourists come to Nepal every year for recreation and sightseeing despite the fact that we have no better hospitability, that means our districts have no sufficient hotels and restaurants and our transportations system is a matter of shame. One the one hand we are a country of great natural gifts Nepal is a country of great ancient temples and pagodas and yes Nepal can be developed as a country for religious pilgrimages considering its holy temples.
The Buddha was born in Nepal. There are many Buddhist countries like China, Thailand, Japan, Korea, Srilanka etc. from which every year so many tourists visit Nepal and visit many Buddhist shrines at different places in Nepal, and Lumbini being the major one. If the government gives a little attention Nepal can be a great destination for tourists from all over the world.
Since Nepal is gifted with innumerable resources and potentials foreign investors are finding Nepal a really industrially viable or favourable nation to invest in. What the government must do is trigger its infrastructures, backbones for development. Nepal needs to develop a world-class transport and communication system and must generate hydroelectricity that can unstoppably meet the energy needs of the country. The government must prioritize vocational education so that the people of the country can work on their own