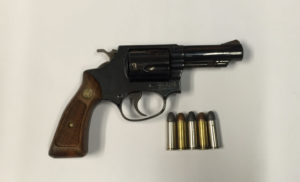 Dhangadhi: Police here have arrested a person along with a country-made pistol from Dhangadhi village, Dhangadhi sub-metropolitan city-7 last night.

Rakesh Chaudhary, a resident of Campus Road, Dhangadhi Ward No. 7, was arrested with the pistol by a team of police on patrolling duty at 10 pm on Wednesday.
The police suspect that the pistol might have been smuggled in from across the border from India. Further investigation was underway in this connection, police said. Chaudhary was on the police’s wanted list on narcotics drug pedaling charge.RSS