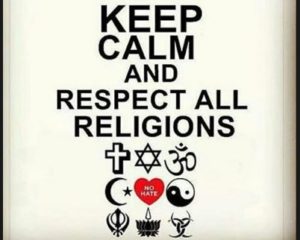 Religious tolerance is a great virtue one has to practice to while living in society. That means one has to learn to cohabit in a community without conflicting with different faiths. Yes, every society has a multiple of faiths and in today’s societies, particularly when we live in megacities we come across people coming from different villages or cities or communities.  Therefore one has to cultivate a habit of coexisting in society so that everybody can be at peace with one another.  To this end, one has to learn something about secularism.  The state must be secular. That means it must not patronize a particular culture or religion or belief. There should be a separation of religion from the state. Nepal, therefore, should not be a Hindu state and if Nepal declares itself a Hindu faith it is doing dishonesty to the rest of other faiths like Buddhism, Christianity, Islam and the like.  If only Hinduism becomes patronized and protected the believers of other faiths become antagonistic and may rebel against one another. Religions are not subject to be political and politicizing it is something to disrupt the already existing harmony and coherence of society.

Needless to say, the majority of people in Nepal are Hindus and the rest of other faiths fall under the categories of the minority.  While the state must recognize, respect every religion and people of all faiths to be treated equally it should keep itself away from politicizing a faith.  We know through history millions have been killed in the name of religions. We know Hitler’s campaign to exterminate the world of Jew and he did not want to take a breath or stop to take a rest until he can be the world totally free of Jews. Even today there are conflicts or killings in the name of religions all over the world. Nepal is the only country wherein secularism is still practised. When Nepal was a monarchic state it was called a Hindu state and the king a Hindu king. .Now Nepal has been a republic nation and no more a Hindu nation politically speaking but yet a few conservative people fighting for declaring Nepal a Hindu nation. This is likely to divide the people who are always one whole.

One is free to practice any faith here and is free to go to the temple.  But unfortunately, there is a restriction for foreigners to enter the temple of Pashupatinath.  Is this a good practice? When Hindus are allowed to enter any temple, churches, mosques and worship but Hindu temples do not allow people of different faiths to enter the temples of Hindus and worship. This is a kind of bigotry, narrowness or pettiness on the part of Hindus.  Humanity is one whole and religious division is unnecessary.

Nepal’s religious tolerance has been exemplary for many. Every year we hear communities, even in India are fighting and even killing each other in the name of religion whereas in Nepal people of different faiths, whether one comes from a Hindu community or Muslim or Christian community they are living totally harmoniously. It seems only a few political parties to safeguard their vested interests are dividing people, the peace-loving people of Nepal along religious lines.  This should be protested by all of us in order that our age-old harmonious state or religious tolerance will go eternally undisturbed.