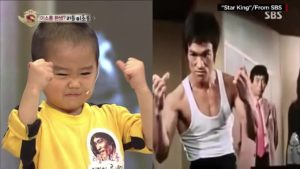 Few have not heard of Bruce Lee, a famous martial arts instructor, actor, film director. As a Hong Kong and American actor he had a great personality in pop culture, considered an icon. And he is one of the most influential artists in the world and had great influences on American movies. With his Hong Kong and Hollywood produced films Chinese martial arts reached a great height in the twentieth century. His popularity rose highly after the release of the movie Death which got great popularity in China. This movie is about Chinese nationalism. Apart from Martial Arts, he studied drama, Asian and Western Philosophy. He even wrote poetry to express his deep emotions. Thus Bruce Lee represented an age in a variety of subjects and is considered an icon of the twentieth century. He was a great lover of knowledge and owned a library of his own. He was greatly influenced by Taoism, Buddhism and by J Krishnamurti. He had said Martial Arts he had chosen as a discipline that helped his self-expression. He was second to none as far as martial arts is considered and left a great legacy in the history of Martial Arts.