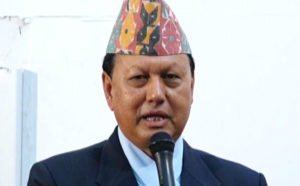 Jalbire (Sindhupalchowk): Minister of Information and Communications, Mohan Bahadur Basnet, has underlined the need of the victory of the democratic alliance in the upcoming elections.
In his address to the Nepali Congress election campaign at Dhande of Jugal Rural Municipality-5 Sunday, Minister Basnet from the major ruling party NC said, “Existence of democracy matters more in the upcoming elections than the victory of any individual,” urging voters to vote for the democratic alliance candidates for the ‘sustainability’ of democracy.
He took the time to make promises for better life opportunities for the people of entire Sindhupalchowk provided that voters believed his candidacy and sent him to the House of Representatives through the upcoming election. He is the NC candidate for the House of Representatives election from Sindhupalchowk-1. He also pledged to come up with unique development projects for his constituency if he got an opportunity to be the member of House of Representatives and such projects according him will change the fate of the people.
The Information and Communications Minister, talking about the government plan to fully digitalise the country by 2027 AD, said the provision for printing currency notes within the home which was ensured after a short time he assumed the office has saved billions of rupees from outpouring.

On the occasion, he formally welcomed newcomers to the party who decided to discontinue their affiliations with the CPN (UML), CPN (Maoist Centre) and Naya Shakti to join the NC.Rss