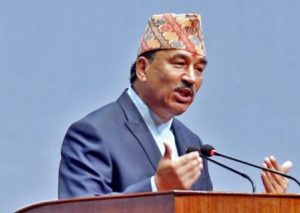 Hetauda: Deputy Prime Minister and Rashtriya Prajatantra Party Chairman, Kamal Thapa, has said that the major political parties should be active to bring good governance through democratic culture in the country as well as to make the upcoming elections a success.

Inaugurating the two-day training of trainers (ToT) camp organised by RPP Central Training Department at Hetauda today, he said that election is the primary medium to establish political stability and long-term peace in the country and to head the people towards economic prosperity.
The RPP Chairman said, “Although the country experienced many political changes, it failed to head the country towards economic prosperity and guaranteeing fundamental rights. So the upcoming elections would bring happiness in the face of the people.”
Similarly, Central Training Coordinator of RPP, Bhuwan Pathak, said the training is being organised to take the party’s policy and principle before the people.

A total of 255 party leaders including District Chairmen, secretaries, treasurers and central office-bearers of province no 1, 2 and 3 are participating in the training.Rss