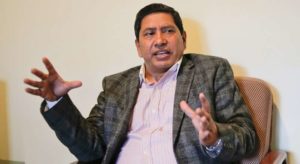 CPN (Maoist Centre) leader Narayan Kaji Shrestha, who is contesting the polls from Gorkha-2 as a common candidate of the left alliance, has claimed that the alliance will secure the two-thirds majority in the upcoming elections.
Speaking in an election programme organized by the alliance at Palungtar Municipality-2 on Friday, leader Shrestha claimed that the development activities would be accelerated after the formation of the new government led by communist parties.
It may be noted that Naya Shakti Party coordinator and former Prime Minister Dr Baburam Bhattarai is also contesting from the same constituency as the common candidate from the democratic alliance.RSS